Raden Umar Said Vocational School students' skills in the field of animation deserves to be given two thumbs up. SMK students Raden Umar Said can produce animated films that are used by the industry in foreign countries. Moreover, the students at RUS Vocational School have access to a school with international, modern quality facilities where they are able to practice their skills. 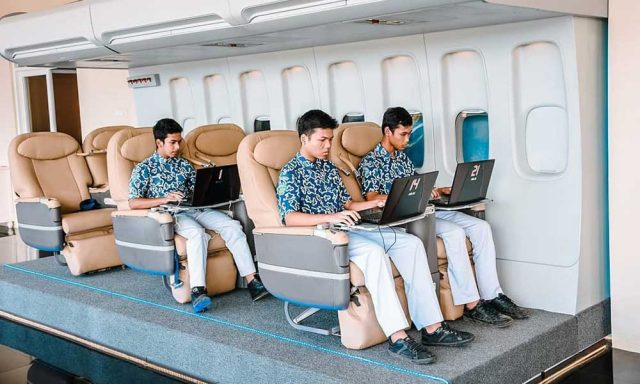 Some of the facilities that are available at RUS Animation Studio are Drawing Studio, Production Studio, Visual Effect Studio, Color Grading Studio, Sound Studio, Mini Theatre, Motion Capture Studio, and Art Studio. The facilities such as existing software at RUS Vocational School are designed with help from the industry. With these industry standardized facilities, students who start studying at 7 in the morning can feel at home until 10 pm.

Primadi explained that at the beginning of its establishment, the animation studio accepted 25 students from 25 registrants. "Those who registered are accepted. Because of its status as a vocational high schools, our focus is on middle and lower class students who don't have money for college. We think about how they can directly work after graduating and help their parents. We focus on majors where they can work and earn more income from scholars", he said.

According to Primadi, the first thing he did when working on this project was to review the school’s curriculum. "We are collaborating with the industry, (compiling) the curriculum. Next, the most difficult thing is to train teachers because we don't train students directly. The teacher is the teacher. It takes about a year to ascertain whether the teacher can teach or not", he added.

"Next, the infrastructure must be adequate to what the industry needs. Then there are scholarships and finally they (students) must make something that is sold in the industry’s market to ensure that what is learned is truly appreciated by the industry, " Primadi said.

The curriculum at SMK Raden Umar Said is determined solely by students under the direction of Djarum Foundation and the school. Given the lengthy process of animation, students can choose material that suits their interests. In the second year, students will have more internships at the company than at school.

In contrast to schools in general, students of SMK Raden Umar Said do not study in a typical classroom but rather in a free and open place. The class concept is unique and fun with the hopes of stimulating the students’ creativity.